As they argued, a most peculiar little figure stepped nimbly from behind the sign and approached them, talking all the while. “Yes, indeed; indeed it does; certainly; my, yes; it does make a difference; undoubtedly.”

He was constructed (for that’s really the only way to describe him) of a large assortment of lines and angles connected together into one solid many-sided shape—somewhat like a cube that’s had all its corners cut off and then had all its corners cut off again. Each of the edges was neatly labeled with a small letter, and each of the angles with a large one. He wore a handsome beret on top, and peering intently from one of his several surfaces was a very serious face. Perhaps if you look at the picture you’ll know what I mean. 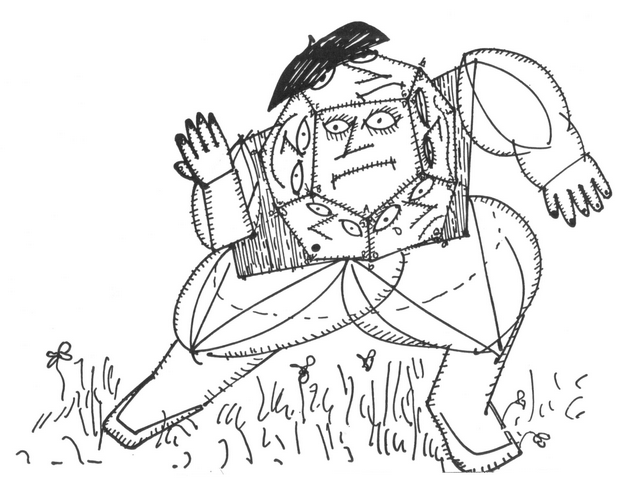 When he reached the car, the figure doffed his cap and recited in a loud clear voice:

“My angles are many.
My sides are not few.
I’m the Dodecahedron.
Who are you?”

“What’s a Dodecahedron?” inquired Milo,who was barely able to pronounce the strange word.

“See for yourself,” he said, turning around slowly. “A Dodecahedron is a mathematical shape with twelve faces.”